When I was playing football in the playground, there was only ever one player I was pretending to be – Robbie Fowler.

He was everything I wanted to be – a local Liverpool lad who was living his dream by scoring important match-winning goals week-in, week-out in front of a Kop that was going wild with delight!

Whenever we needed a goal, Fowler would pop up from the middle of nowhere and knock it in. They weren’t always the most spectacular ones but invariably the ball would drop to his feet, and 9 times out of 10 it would end up in the back of the net – he wasn’t called the ‘most natural finisher’ by the pundits for nothing!

He will forever be a hero to me, which is why I’m glad that there is talk of a return to English football, and also why I’m glad we’ve finally got a Fowler tribute t-shirt out!

There IS a God – I saw him score in front of the Kop! 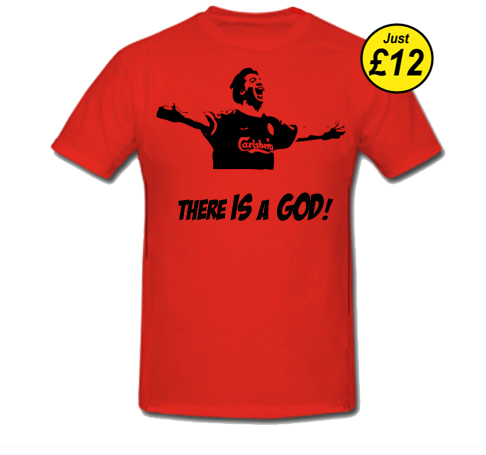 Liverpool haven’t been in a major final since 2006, and we haven’t played at Wembley since those white-suited days of 1995, so forgive us if we seem just a little bit excited about the Carling Cup!

Whilst rival fans used to sneer at the League Cup, we all know what a massive difference a piece of silverware can do for your season – just ask Arsenal, who managed to nosedive after losing to Birmingham last season – so we’re hoping Liverpool go all-out to bring the trophy back to Anfield!

The truth is that the big clubs all want to win this tournament these days, and they all put practically their best teams out to do so. To beat them all and make it through to the final is one thing, to overcome that last hurdle, and see Stevie G lifting the trophy aloft at Wembley, will be quite another!

We’ve got our train tickets booked, and will be out and about in London early, enjoying that nervous pre-match away-day buzz! A win could herald the start of a new era, with King Kenny at the helm as we head back into Europe, and start becoming an all-conquering force once more.

There might be a countless millions of fans worldwide who don’t want us to win, fearing that it will prompt our resurgence on the world stage, and that will just make it all the sweeter when we win!

We’ve designed a limited edition commemorative t-shirt for the occasion. We’re going to enjoy remembering this day, and think that having the t-shirt will be the perfect way to do so!

With the setting up of the shiny new site, we also included a mailing list function. We have added all of our previous customers email addresses in, so anyone who has bought from us will be getting an email (though its really easy to opt out / unsubscribe).

Whilst this month its just an introductory email letting everyone know about the new site and the new ‘One Love’ t-shirt, we anticipate sending out discount codes and special offers to our mailing list, so its well worth you signing up too!

What else is going on at Liverpool Tees? All sorts – including putting the finishing touches to our latest tribute t-shirt of Robbie Fowler AKA God. That one will be out soon!

We’re having a ‘Get ready for the United match’ SALE!

Our much sought-after Support Suarez t-shirts will be £10 for just 24 hours, with the idea being that we get them sent out to you in time for the United match on Saturday morning! (though we make no guarantees that the postmen will get it there!)

Any orders placed before 6 today will be sent TODAY, whilst any placed after that will be sent on Thursday morning – should reach you in time by First Class post. If you live abroad it won’t get there before Saturday’s match, but its still a good t-shirt anyway…!

BUY IT NOW for £10: Support Suarez

Hopefully having a blog (which you can comment on) will enable us to engage all Liverpool fans across the globe a bit more! We want to hear from each and every one of you – who do you want immortalised on our t-shirts next?!

We’ve just about caught up with all the orders for the ‘Support Suarez‘ t-shirts, and are now looking for the next design. By the looks of Wednesday night, we could well be in the Carling Cup Final. It will be our first trip to Wembley in ages, so we’re looking at producing a t-shirt to commemorate the experience. We all know the Carling Cup isn’t the most prestigious of trophies, but if we win it then it proves we are on the right track, and it will be some well-deserved silverwear for King Kenny and the lads.

Would you buy a t-shirt celebrating the Carling Cup victory, or would you prefer one that commemorates the trip to Wembley instead? Please do let us know by commenting below.